Perth-based Goldstar Transport, in common with many trucking firms, highly values the contributions its drivers make to the operation.

The company appreciates that its drivers are linchpins of the operation and that without them, there would be no business.

Therefore, the equipment it chooses to buy must not only be of the highest quality, but also possess features that reduce stresses for the drivers and improve turnaround times.

A proportion of Goldstar’s work entails deliveries to supermarket distribution centres where the curtain-sided semis are backed into finger docks and side unloaded. With drivers completing up to 12 such unloads per day, it’s not hard to see how automated curtain locking systems such as Krueger’s Buckle-Less can be a huge benefit in terms of productivity gains and reduced driver fatigue.

“Krueger’s 48’ Buckle-Less works well for us in the supermarket space and Krueger worked hard to keep the tare weight down, as we are carrying heavy products that put us close to the weight limit,” says Sean Carren, Managing Director of Goldstar Transport. 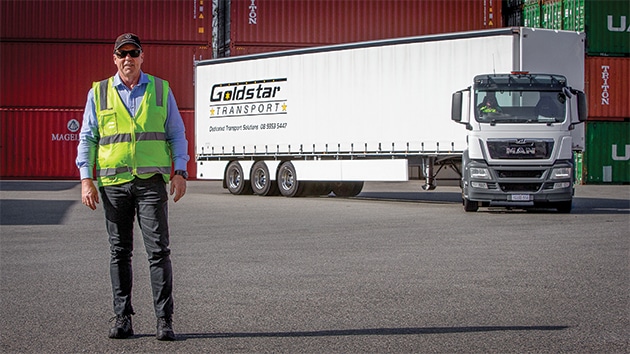 Sean says while the company has been buying Krueger trailers since 2018, they have a long relationship with Krueger’s newly appointed CEO, Kevin Dennis, former MD of MAN and Western Star import for AU & NZ.

While business-to-business relationships are important, Sean explains, it is the quality and efficiency of the product that ultimately determines the purchase.

After a thorough evaluation process, the Goldstar team determined Krueger’s Buckle-Less load restraint rated curtain system was the one that ideally suited the business.

“We evaluated all of the automated curtain trailers on the market and decided that Krueger offered the best solution for us,” Sean says.

“With our supermarket delivery work this is a key thing because it makes life easier for the drivers and that’s really what it’s about because the drivers are our most valuable asset.”

Sean has high praise for the team at Krueger Transport Equipment – especially WA State Manager, Nigel Withnell – as they made the trailer buying process run smoothly for Goldstar Transport.

“The service we received with these latest trailers was fantastic – Krueger had them ready on the exact date they’d initially told me they would be ready – you can’t ask for more than that,” he said – adding that they were more than happy to accommodate Goldstar’s request for stylish and aerodynamic side under-run panels. The panels are designed to lift up for easy access to the spare wheels on the carrier.

Other features of the 48’ Buckle-Less trailers include Krueger’s own Road Friendly Suspension (RFS), which has served Australia’s road transport for more than 20 years, and Knorr-Bremse EBS.

Sean says having the correctly specified trailer for this operation is paramount for Goldstar Transport. While the company seeks to buy WA produced trailers where practicable, the local manufacturers don’t have the buckle-less curtainsiders that the eastern states manufacturers produce,
he says.

“Operating trucks in WA does present a unique set of challenges and while we have a number of good trailer builders over here, none of them build a buckle-less curtainsider,” Sean says.

“After evaluating the major contenders in that space, Krueger brought the most to the table for our operation.

“Having Nigel on the ground here is another bonus because he understands the WA landscape and prior to Covid-19 we regularly saw Grant here also.”

According to Sean, Krueger is a dependable business partner that understands the needs of Goldstar Transport and allows the company to evaluate products before they commit to purchase, thus ensuring the product is fit for purpose.

“This is a prerequisite for us – if a manufacturer won’t allow us to do this, we won’t go with them.”

Established in 2001 in the Perth suburb of Kewdale, Goldstar Transport has become one of WA’s leading family-owned transport companies. The company has a staff of 175 and serves 180 customers across a broad range of industries including contract distribution, warehousing and logistics, container transport, fast moving consumer goods, steel, mining and liquefied gases.

With a view to continuously innovate in the areas of driver wellbeing, efficiency and productivity, Goldstar Transport will continue to specify equipment like the Krueger 48’ Buckle-Less trailers to keep it at the cutting edge of transportation in the vast state of WA and beyond.

Fast Fact: Capitalising on the driver-fatigue reducing and time saving benefits of Krueger’s 48’ Buckle-Less Kurtainers, Goldstar Transport has invested in several units to assist in its supermarket distribution duties. 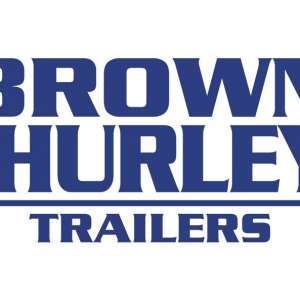 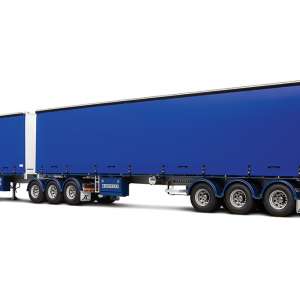